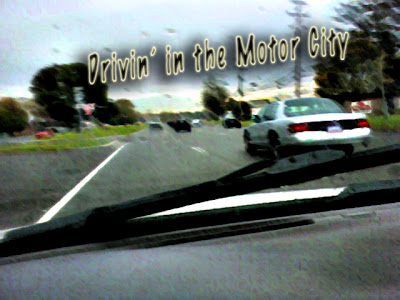 For some reason, I'm fascinated with roads. Roads that we travel everyday lead to different cities, towns - places where people live a parallel existence, as oblivious to you as you are to them. I'm often excited when I find myself on a familiar road far away from home. I'm intrigued as I follow the road, passing landmarks, homes and businesses that are different from the ones I know. Sometimes I even take the long way home from just to see different sights.

Now don't get me wrong; I don't just go crusin' carefree whenever I get the whim. Gas is already far too much of my budget. But skipping the high-speed freeways every so often can be quite satisfying. And I've really got no other choice. I live in the part of the country that put the car on the road en masse: the Motor City. If you wanna get around here, you've gotta have a car because public transportation is not reliable. So since I'm gonna be on the road anyways, I might as well enjoy the ride :)

I know Gadhafi was a dictator, mercilessly killing his own people, but the videos of  him with blood dripping from his body while people celebrate all around, are quite sickening. I mean, people were jostling his dead corpse as if it were a toy or something. I understand that Libyans feel vindicated for the many wrongs committed against them. And while I definitely don't support the man or what he stood for, but there should be some sanctity in death. That is all...
Posted by Admin at 12:32 AM 2 comments:

On the other hand, I can't pretend like Naija people can do no wrong. That would be, well..... dilusional. Hahahaha.....  One thing I've noticed growing up: Naija people get mouth. In other words, they say what they have to say, whether you like it or not.


In America, where politicians and advocacy groups fall over themselves to be politically correct, Nigerians are one group of people who don't always play by these rules. They often say what they have to say bluntly. It's usually not to hurt anyone's feelings either. That's just the culture, I guess. However, those who have assimilated more into the way things are done in America have learned how to have a little more tact. Still, there are those who sabi open mouth. They haven't quite learned the skill of self-censorship.


I can't count how many times an uncle or auntie has said something that has made me want to bust out laughing because of its harshness. Most of the time I do my best to stifle the laugh by biting my tongue or cheek because I know they weren't trying to be funny. Here are a few choice lines I can remember...

If you embarrass me, I will slap your head on the wall!
Said by one lady at our old church to a group of us who were preforming a dance that she taught us. As if the point ouf us dancing was to praise her. Mcheeewwww.....

In 2009 I cut my hair, and I loved it.
Ah ah, Chichi. We're trying to hear wedding bells, and you're cutting your hair?
Said by one aunty in 2009 when I cut my hair. Smh. Can you imagine? So because I cut my hair short, I become so unattractive that no one would want to marry me?! Who said I'm catering my hairstyle to get a mate? Who said I'm even ready to get married, all of 21 year old at that time. I of course didn't say these things, but I sure thought them. I've noticed a similar complex with older Naija people, particularly women. I think it stems from the fact that many of them, when they were in school in Nigeria, were forced to cut their hair so that they wouldn't be focused so much on trying to be cute. As with most things that any young person is forced to do, they hated it. And for girls, it's quite understandable that they would be unhappy with being forced to cut their hair. And they had to go way short. We're talking boy, close-shaven short. So now that long, glamorous hair is available to all, they can't understand why someone would choose to sport short hair. I used to feel similarly, but when I cut my hair in 2009, I saw the light. I was fly, and you couldn't tell me nothin'! Lol. As my hair grew, I found that it took more time to maintain it than I had. So for now, I've gone back to weaves and braids. But my natural hair is now an option, where I didn't think it was before. And I now know that beauty is in the eye of the beholder. Hair long or short, weave or no weave, I can feel and look beautiful. Anyone who says otherwise is silly.

You people are wasting away in America eating hamburger!
Mr. Vincent C. Anigbogu, founder and director general of the Institute for National Transformation, spoke at the African Christian Fellowship National Conference back in July. He chastized both the youth and the adults for getting comfortable in America and forgetting about the state of their home countries. Really had to bite my tongue to keep from laughing on this one. He made some good points though. He had actually lived and worked in the United States for 30 years before he went back to Nigeria and has since been making great impact through his organization.

No wonder you are this big.
My dear uncle actually left this comment on a Facebook picture I had posted. It was a picture of a guy holding a bowl of chips at a surprise party for one of our friends. The guys is, well, quite big, as my uncle so "tactfully" observed.


No wonder it was somehow unrounded
Ummm... no pic for this one. Even if I had one, I wouldn't post it. Lol. My friend told me that her mom was looking at her backside and wondering why it didn't look as round as she remembered. It was due to her change of underwear (a thong) ;) Hehehehee....

And these are only the ones I remember right now. My mom told me that before she came to the U.S., she was walking down the street in Lagos. She had tied her headscarf in a particular way. One man along the road called to her, "My sista, you think you look good. You don't look good o!" Hahaha... Then another time, when she went back to Naija to visit, she was walking with my dad's older brother, her brother-in-law. Their car had broken down and they were forced to walk. Some "keen" observer called out to her "What are you doing with that man? He's too old for you o!" Hehehee... see our people o. Chei!
Posted by Admin at 12:02 PM No comments:

Man, I swear, I love my Naija people. We have our negatives and we have our positives, but in the end, there's nothing but love for them in my heart.

One contrast between Americans and Nigerians was made so clear to me a few years ago. A few of my friends and I were spending the night at one of our other friend's house. We stayed the night, woke up the next morning and were with her throughout the day. Do you know that she didn't offer us anything to eat the whole time we were there? I know we were there to hang out and help her with the event she had the next day, but I was like, come on. The night we got there we went and bought ourselves some food and the next day, we just went hungry until we ate at the event.

My friend obviously wasn't Naija! I mean, how can people come to your house, spend the night, and you won't offer them anything? Tufiakwa! It could never happen. If you enter a Naija person's house, you won't be there more than 10 minutes before they start bringing out little snacks and drinks.And don't be surprised if they start bringing out a full meal for you. Forget offering - they set it out before you and you're expected to take a little, at least, to show your appreciation (and that you trust them enough to eat their food).

My dad scolded us when we were young when we didn't bring out something for our guests, so now it's like second nature to me. I have to remember though, when I'm at the home of one of my American friends, that this is not always the custom.

Americans can even be eating right there in your face and won't even offer you anything. I'm thinking, "No, I didn't come to your house to eat, but are you really gonna sit here eating chicken in my face and not offer me some?" Lol.  Not all Americans are like this though. Some will conscientiously offer you something, but they certainly won't insist if you're hesitant. Hahahaha......
Posted by Admin at 4:41 PM 2 comments: