In my browsing of Youtube over the past few years, I've come across some videos that stand out to me because of the creativity of the music, the video, or the overall concept. Here are a few of my favorites.

Plenty Nonsense by Trybesmen
The first time I saw this video, I couldn't stop laughing. I think it's so brilliant how they poked fun at situations that would make anyone upset.


Never Far Away by Lagbaja
This video combines excellent vocals, musical composition, and story. And of course, Lagbaja in his famous mask. Truly world-class.


Necessary by Zule Zoo
Everything Zule Zoo does is unique, but Necessary was the first video I saw from them, and I was truly intrigued. The language that they spoke was new to my ears. It wasn't Yoruba, I didn't think it was Hausa, and it definitely wasn't Igbo. After doing a little search, I found that they were from the Tiv tribe.  I also found that one of their videos was banned in Nigeria because it talked about adultery. The video and song, I think. No such thing as freedom of speech in Naija. Lol.....


Lee Lee by Resonance
I definitely fell in love with this song and video the first time I saw it because I loved how it combined Igbo and English. And the white lady singing in Igbo was quite charming, I thought. :)

Naija Luv Thing
Though the video is only a stream of pictures, the song is quite funny and kinda cute. It describes the shakara and forming between a guy and girl who are really feeling each other. Makes me laugh, cause it's so real...


If There's Any Justice by Lemar
First name Lemar, last name Obika; that makes him Igbo baby! Though he's based in the U.K., he's got that Naija blood, so I'll include him here. The first time I heard his voice, I absolutely melted. And the song? I feel like I could have wrote it myself. Sigh......  It's all good though. :)

I think that's enough for now, right? What are some of your favorites?
Posted by Admin at 8:40 PM No comments:

Thanksgiving weekend was extremely good this year. Certainly I thank God for all of his blessings in my life, in the form of people and things. Lol. Really though, family and true friends are really part of what makes life worthwhile. We ate and ate until we couldn't move, watched movies, talked. It was awesome!

The next day my three younger sisters woke up and went Black Friday shopping. I didn't join them because I just said, make I keep my small money! Lol.... I did give them a little money to buy me some new black shoes and they brought me back something nice.

See, I don't even try to fool myself; I know I have shop-a-holic tendencies, inherited from my mother, so I decided to not even go shopping. Don't get me wrong, I'm very practical when it comes to shopping. I like my stuff cute and cheap for the most part. Lol. Not really one for name brands. So joining a long line of eager deal-seekers at 4 a.m. is definitely not my style. It seems when I go shopping, it's either for a couple very specific things. Otherwise I'm on the other end of the spectrum, looking to revamp my entire wardrobe. I've actually done that a few times in my working life. My wallet and bank account cries, but my closet thanks me. LOL! Won't be doing that again though, for a long time. I've slowly learned how to manage my money better.

I've been contemplating my next steps as I'll be finishing with my video, graphics and web program in February. Juggling a few options, but I know things will work out in the end.

Does the end of the year make you as reflective as it does me? It seems like every year, from September to December, I reflect on the year, the past few years and the path I've taken to where I am. Also get clarity on my next steps during this time of year. And many personally significant things happen in this time of year for me. This year is no different. I'm kinda excited for what God is doing, but pensive at the same time.................... Oh well, bout to go take care of some business... Take care!
Posted by Admin at 12:04 AM 2 comments: 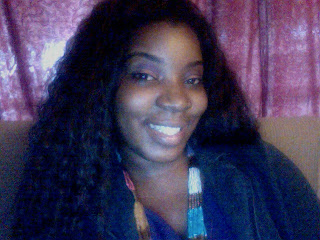 Yesterday my mom directed me in cooking my first pot of okra soup, and to me, it was quite monumental.  And it was very spur of the moment too. She had just came back from the African food store and was in a hurry to go out again so she was like, "Ok, since you already know how to cook everything else, it's time for you to learn how to prepare a simple soup." She didn't know it was already on my to-do list, so that was pretty amazing :)

The soup, complete with smoked turkey and fish turned out great. I was nervous because she had to leave before the soup was done, but everything went well. Guess the Naija side of me is coming up ehn!  Hahahahah....

I can cook almost anything I put my mind to, when it comes to American-style cuisine, from different styles of chicken and fish to beef, potatoes, pasta, and stir-fry. Except don't ask me to make macaroni and cheese cause I've never gotten that down, and don't really try, probably cause I don't really care for the stuff. Lol

When it comes to Naija food, I've got jollof rice, fried rice, rice and stew, and meatpies, down. I'm alright on moin-moin, mainly need more practice. Throw in some meat, plantain and some vegetables (gotta add something healthy) and you've got a meal! But I couldn't be fully proud of my knowledge of Naija food until I learn how to make some soups. So I got okra down now. On to egusi! Lol.... The pounded yam or garri that goes with is is a no-brainer :)

I guess I'm just now learning to make these soups now because for years, I would not eat them. It was strange because when I was little, my mom said I ate them all the time. But for some reason, around age 5 I stopped, even though my parents always made it. It was like that with all of my sisters too. Maybe it was due to exposure of American foods at school and coming home with a different attitude to traditional Nigerian food. Or something like that.  Only a few years ago did I start eating egusi and other soups every now and then. It's not that often though. Still, it's good to know how to make these traditional foods. Gotta keep the culture alive in me so I can pass down as much as possible!

Oh and, if you're looking for pictures of all the tasty food I just mentioned, you might as well stop your search. I don't take pictures when I cook because, well, I'm very practical when it comes to cooking. I'm usually in a hurry to fill empty stomachs when I cook, no time to be snapping away. Food is meant to be eaten, not photographed. Unless you're advertising it, like I did with The MeatPie Girl. Lol. But seriously; I roll my eyes whenever some chicks on Facebook make statuses about what they're cooking and/or post pictures of it. I'm thinking "Woo hoo! Good for you! You can cook huh? Clap for yourself!" Hahahaha.....!
Posted by Admin at 9:28 AM 8 comments: