I had just gotten back from the gym and was eager to get in the bathroom and take a shower, but I found that it was currently occupied by my mom. Being the good and patient daughter that I am (lol) I decided to wait around for her to get done. What other choice did I really have? So I got some water, and turned on my laptop, expecting to spend just about 10 minutes waiting.

25 minutes later I look up, and she's still in there. So I go to the bathroom door. The shower's not running; there are no signs of activity on the other side of the door. Then I hear a "click" of the variety that only cell phone cameras make. "I'm waiting for you," I said through the door. She quickly opened the door, cell phone in hand, snapped another picture of herself before gathering her stuff and making her way out.  "Ha! Faaaacebook!" I said, as she laughed. She knew she had been found out.

You see, since my mom joined Facebook about two months ago, she's been constantly trying to take "good" pictures of herself. I say "good" because it's not like any of her pics are really bad, she's just remarkably picky. Mainly because she's not the toothpick of a girl that she was when she left Naija. And she was apprehensive about reconnecting with old classmates. That was her excuse for the longest time and it kept her away from Facebook. Yet her first profile pic, the one on the left below, was one she had had in her phone for a long time. Quite lovely, isn't she? 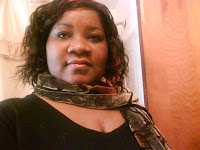 When her father died in September in Nigeria, connecting with people in Naija became very important to her because she saw first-hand how time could rob you of the human connections you cherish the most, if you're not careful.

So I'm glad that she's joined Facebook. She's reconnected with many of her friends from Naija and people she went to school with, even some family members.  But she ain't gotta be hogging the bathroom just to take pics. I mean, come on! That's the only place the rest of us can take a shower, but she can take a picture anywhere.... LOL!!!!
Posted by Admin at 11:02 AM